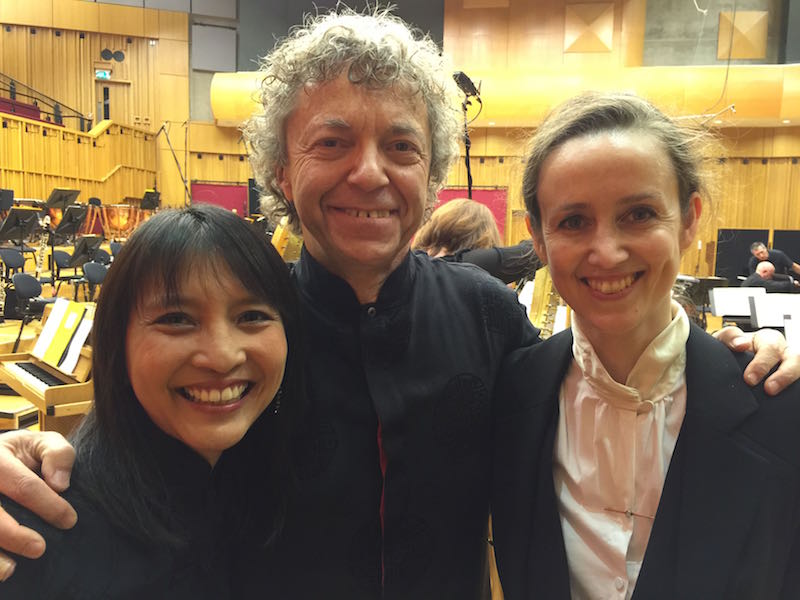 March 8th, is not only Ami's birthday, but also International Women's Day. This year, we got to celebrate it in a grand way! An International Women's Day Concert in Cadiff with BBC Wales, playing a rarely performed work Concerto Grosso by Germaine Tailleferre. It is for two pianos, chorus, saxophone quartet, and orchestra!! And boy, what a journey this was!

Indeed, since its premiere in 1934 (Paris, and London premiere at the Proms the same year), it had never been performed in public, only recorded once in 1998.
From the beginning, we stumbled onto an obstacle--we could not get a hold of the piano parts. We looked everywhere, the publishers Leduc did not have them (they even asked us if WE had them, ha!), neither did Music Sales, and the orchestra librarian certainly did not know where to find them. We finally were able to acquire the full orchestra score from the librarian (manuscript! in Tailleferre's own handwriting), but it was impossible to read off and play from that score, trying to turn the enormous pages every eight bars!
So Ami started transcribing it down note by note onto her little Sibelius, not an easy work, and some piano notes were missing, leaving parts of it "?" for us.
But talk about serendipity....while this was happening, Paul Wehage, a saxophonist-composer, a friend I met through Facebook, while looking at some random photos, asked me in the commentary if we would ever play Tailleferre Concerto Grosso...!

"Well, as matter of fact, we are getting ready to play it! But we can't find the score!"

Then this came back from Paul:
"I have the score!"

It turns out that Paul Wehage not only played soprano saxophone on the 1998 recording, he was the one responsible for initializing that recording project, first of all discovering the piece in Tailleferre's little known catalog of works, finding the duo-pianists (Mark Clinton and Nicole Narboni), the orchestra, etc.! He is passionate about Tailleferre's work, and you can read all about this story on his own blog.

So, we finally receive the piano parts (still in Tailleferre's manuscript!), which made the work for Ami (to continue transcribing onto Sibelius) much easier and clearer. Leduc edition also got involved and started making their own edition from Paul's copy of the manuscript. We finally had a real score by the end, just in time for the concert, and off we went to Cardiff (slight hitch at the beginning of the trip; after all the labour, Ami forgot her score at home, and we realized it when we got to the airport....had to change the flight and go back and get the score!).

The concert went really well. It was program of Women composers, including Lili Boulanger, Cecile Chaminade, among others. The conductor was also a woman, a brilliant young British-Australian conductor Jessica Cottis. And BBC Wales Orchestra and Chorus were in top form. We had a great concert, which was broadcast live on BBC Radio. Portion of it can be heard on my Media Audio page. Please have a listen! We are also hoping to record this, (crossing fingers!!), along with Concerto for Two Pianos by Matthew Hindson, written especially for us in 2011. (more on this story another time).