Review from our concert in Guernsey

This just came in.  We are so pleased to receive such a nice review from our recital in Guernsey, which was the first in the series of Satie programs!

Thanks to the sponsorship of Rawlinson and Hunter, the final recital of the festival presented the highly acclaimed French piano duo, the husband and wife team of Pascal and Ami Rogé. Their programme, a new compilation for them, was unashamedly and entirely French. This may have been in celebration of the Festival’s dedication to that French colossus, Victor Hugo, or perhaps as a compliment to Guernsey’s past close cultural links with France. More probably they simply wished to promote interest in some often neglected parts of the early 20th Century French repertoire.
Many concertgoers will know the late romantic style of French Impressionism through the music of Debussy and Ravel, but the turmoil which followed the Impressionist period in painting also affected music. Just as Picasso wrestled with his talent to absorb and develop the many modernist approaches to the visual arts, so too did Erik Satie in music. Satie’s work was prominent in both halves of the recital, and in the second half, opened by two of his compositions, we heard pieces writtten by four of his renowned followers from the group ‘Les Six’.
The Rogés made light of the technical problems presented. They seemed to act intuitively as one. At times it was hard to see whose hand was playing which line of music. Skilful hand-crossing and overlapping between duet partners on the keyboard is essential, but the sounds produced by the Rogés never betrayed the slightest unease. Equally, their interpretation was as of one mind, the notes flowing unfettered from their shared sense of the composer’s intentions.
Satie was a wicked and witty debunker of solemnity in musical style and form. A glance at the printed programme showed titles such as “Three Pear-shaped Pieces” or “Sketches and Provocations of a Wooden Man”, so what did we expect? Of course we heard no sonorous harmonies, except in deliberate parody of earlier, German Romantic fashion. Satie was challenging contemporary and conventional expectations of harmonic progression, rhythmical regularity, and thematic structure., and the Rogés revelled in that anarchic and playful mood. The audience picked up on this gradually and soon responded to their virtuosic display, even if not always grasping every satirical or comic element.
Two of Satie’s more familiar and much loved “Gymnopédies” eventually provided something of a comfort zone to open the second half, with their plangent harmonies, repetitive structure and mordant melodies,. These were followed by one of the high points of the evening, a magical evocation of the waltz, “Je te veux” (“I want you”), which should be better known. The Rogés have certainly opened up for Satie fans less familiar sound worlds for further exploration. Not to forget the music of those he influenced, such as Milhaud, Poulenc and the one female member of “Les Six”, Germaine Tailleferre, who all featured.
Women composers have not fared well historically in gaining their due recognition, but Tailleferrre’s “Images” more than stood on an equal footing with her better known male colleagues. Again thanks are due to the Rogés for introducing her to those of us who had not noticed her work before, as well as for granting a stunning encore in the shape of Ravel’s magnificent “Feria” from “Rhapsodie Espagnole”. It was without doubt a great privilege to listen to piano duet playing of such superlative musicianship and imaginative artistry. 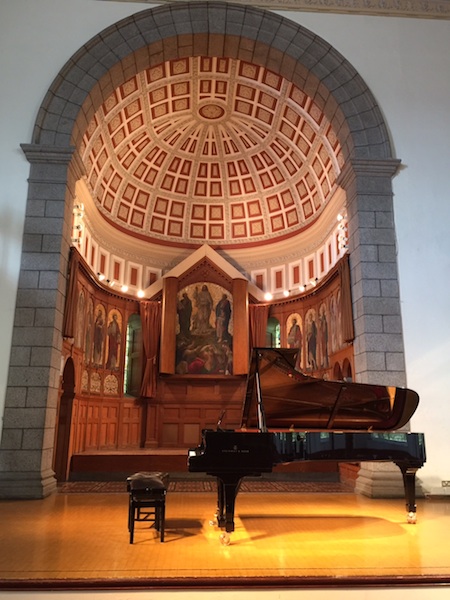